For Twinwood 2019, we are delighted to announce that our cheekiest host, Twinwood's perennial cabaret star Dusty Limits, will be fully unleashed to create an evening of risqué humour in our great new indoor venue, “Club Marlene”, introducing a line-up of comedians and magicians providing adult-only entertainment well into the night... 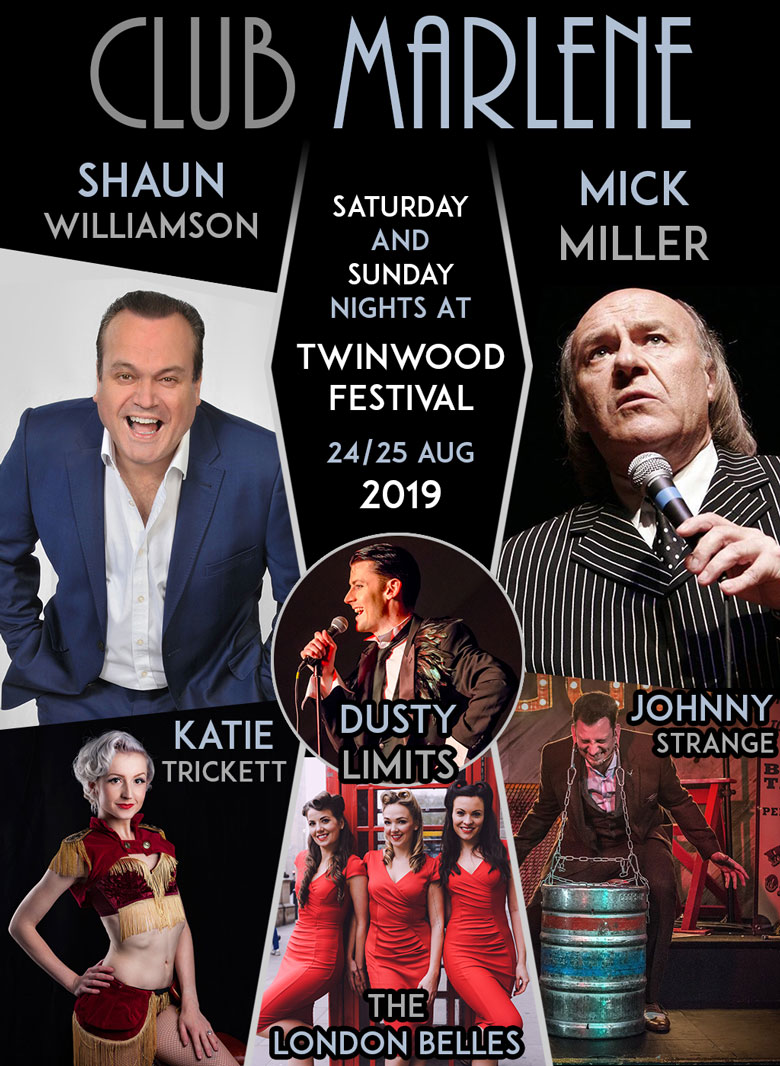 On both Saturday and Sunday nights, the sublime 1940's singing trio The London Belles will open proceedings, followed by acts from Dusty himself, performances from magicians Johnny Strange and Katie Trickett, plus great sets from two very special guest comedians...

We are delighted to welcome Mick Miller as our first guest comedian. Sometimes known as “The Bald Guy With The Long Hair”, Mick Miller is one of the hardest working comedians in the UK. He was the stand-out star of the 2011 Royal Variety Performance, winning the hearts of the nation in the ITV show, "Last Laugh in Vegas".

Mick got his big break on ITV’s “New Faces” which was the premier talent show of its day. He became a household name when he was a regular on ITV’s “The Comedians” and has continued to work solidly ever since.

Shaun's other television roles have included parts in "Extras", "Life’s Too Short" and the film of "The Invention Of Lying" plus many more. Ricky Gervais has hailed Shaun as one of the best comic actors in Britain today, and likened him to the talent of Ronnie Corbett.

His range of talents are incredibly diverse, and Shaun has indeed become one of the nation's best-loved comedic artists. With a talent for singing too, Shaun has won the celebrity version of "Stars in their Eyes" for his uncanny performance as Meatloaf.

Shaun and Mick will appear on both Saturday and Sunday evenings of the festival, and stay tuned for Club Marlene's full schedule!

See you at Twinwood - The ultimate vintage festival for music, dance and fashion!